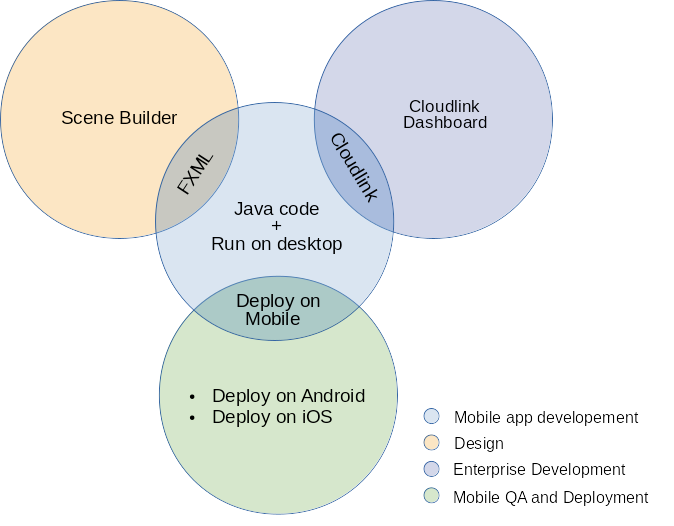 With Gluon Scene Builder, designers or developers with graphical skills work on the layout of an application using a drag and drop tool. They can include CSS files and other graphical elements. Gluon Scene Builder operates on FXML files, which can be used in Java code. Separately, the Java developer can work on the business logic in the application. This can be done using the Gluon IDE plugins, which make it possible to create 100% cross-platform Java applications that run on desktop, iOS, and Android systems.

While the Gluon tools make it very easy to run those mobile apps on connected mobile devices (and it is explained in detail in the getting started guide), many developers don’t have the required system tools or devices to test their apps continuously on devices. That is not a problem, as the mobile apps are really 100% cross-platform. Therefore, Java developers typically work on the apps in their IDE, and test them on their desktop. As long as one developer also tests on iOS and Android, or you use a CI tool for this, the workflow is still valid.

Note that in this scenario, a single Java developer can combine different role, or even all roles. But the important thing to mention is that Gluon Mobile and Gluon CloudLink provide the required abstraction so that a Java developer can use his familiar tools (an IDE) to create a Java mobile app using only a desktop or a laptop, where the mobile team makes sure this app is tested on mobile devices and the enterprise team makes sure the required backend functionality is implemented. In both cases, the Java developer working on the mobile app is not blocked and can write and test mobile apps in Java.

If you want to know more about how the Gluon products enable the Mobile Enterprise using Java, have a look at our white papers. If you have any questions or need support, you are kindly invited to contact us.